We are WORLD CHANGERS!

WOW!  The kids did an incredible job handing out free reusable bags to help our community  make less trash!  I was SO proud of them.  Here is what they had to say about the experience:

What did you think about our service learning campaign?
Journey- Some people said yes and some people said.  I liked it both ways.
Macie- I liked it when my daddy would tell me that a human was coming and I got to give them a bag!
Audrey- I was shy at first but then I did it and it was fun!
Trista- I liked it when me, Sloan, and Macie all went to Mr. Shawn and we all tried to give him a bag but he took Macie’s bag.
Jonah- People were coming in on both sides and I had to run  to both sides to give bags then back to the middle to give a bag and it was really fun to hand them out!
Isaac- It was embarrassing when Corbyn was running around.  At first I thought I was the only one with butterflies.  After I took a breath they went away and then handing out bags was kind of not very fun because I ran out of bags too quickly.  I liked it when people took my bags so we can have less trash in our town.
Elias- It was good because I like when someone gave me some dollars even though I said free.
Dylan- I thought it was pretty nice when people took my bags.  I handed out all of the bags that I had!
Zoe- My not favorite part is that I wasn’t really getting to talk to everyone.  But my favorite part was when I got to talk to the first guy and I asked him if he would like a free bag and when he took it I told him we were trying to make less trash and he could put his groceries in it!
Mason- I went to the store and I gave people bags.  I felt sad though because I wanted to keep them.
Michela- It was awesome!  It was so much fun and I gave away all of my bags.  I wanted to keep one for my family but I was too excited and gave it away!
Liam- I loved it when my brother wanted to help but I didn’t need him too.  I ran over to somebody and gave them a bag on my own.
Corbyn- It made me sad that Isaac said that I was running.  I did not run.  When I asked someone if they wanted a bag and he asked how much they were and I said they were free.  He thought I was Jayson who made the bag but I said that he was my classmate and I am Corbyn.
Collin- I loved it because only one person told me no that they didn’t want a bag.
Reese- At first I was a little scared but then at last I felt very good.  I liked giving bags to people.
Jayson- It was kind of boring because a lot of people said they don’t want a bag to me.  But some people took it and that was good.
Sloan- I didn’t like that people didn’t give me money like they did Elias.  I liked it when Mr. Shawn came and it was a surprise for Ms. Baker!  I didn’t like when people said no but I said thank you anyway.
Blake- I gived people a bag even if they were going out of the store.  And I saw someone from our school and also some people said maybe to a bag.  What does that mean?  Some people said no.  But mostly they said yes.  I felt so happy, happy as a creeper when he explodes. 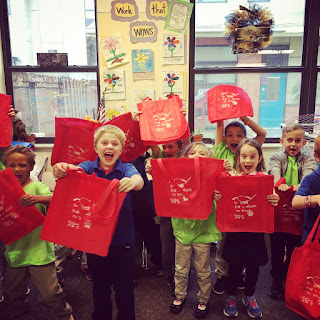 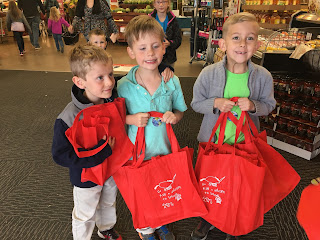 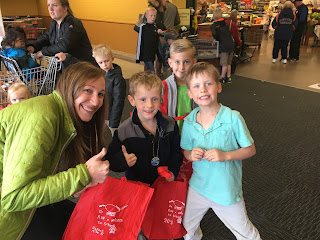 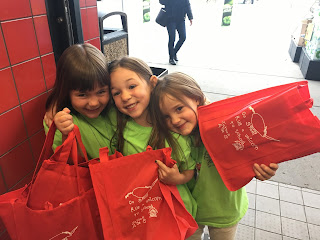 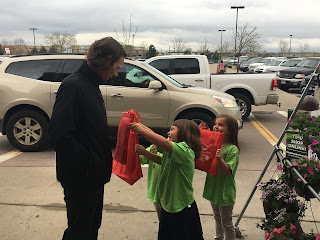 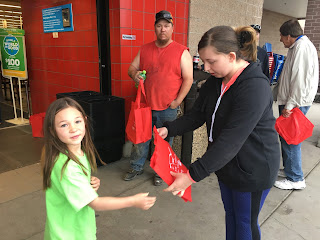 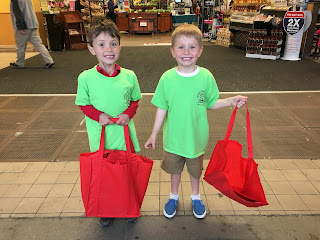 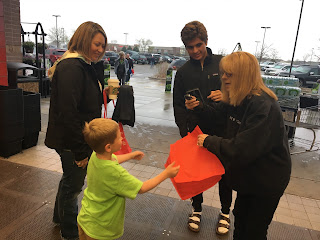 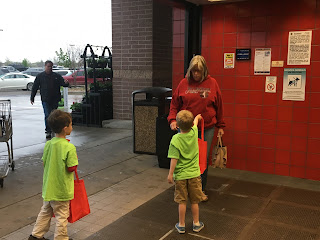 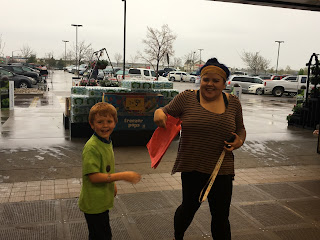